Most chiefs already know why a law enforcement agency would implement an Early Intervention System (EIS). Police early intervention systems are designed to help agency leadership identify officers who need additional support. All in an effort to prevent those individuals from having an adverse incident with a citizen or other personnel.

But what conditions result in an alert, and its accuracy in helping agency leadership effectively intervene, might not be as widely understood.

Traditionally, these systems use triggers tuned to flag an officer whose activity exceeds agency-decided thresholds. Critically, this type of system enables police executives to remain aware of potential personnel issues. However, that awareness comes with a caveat: 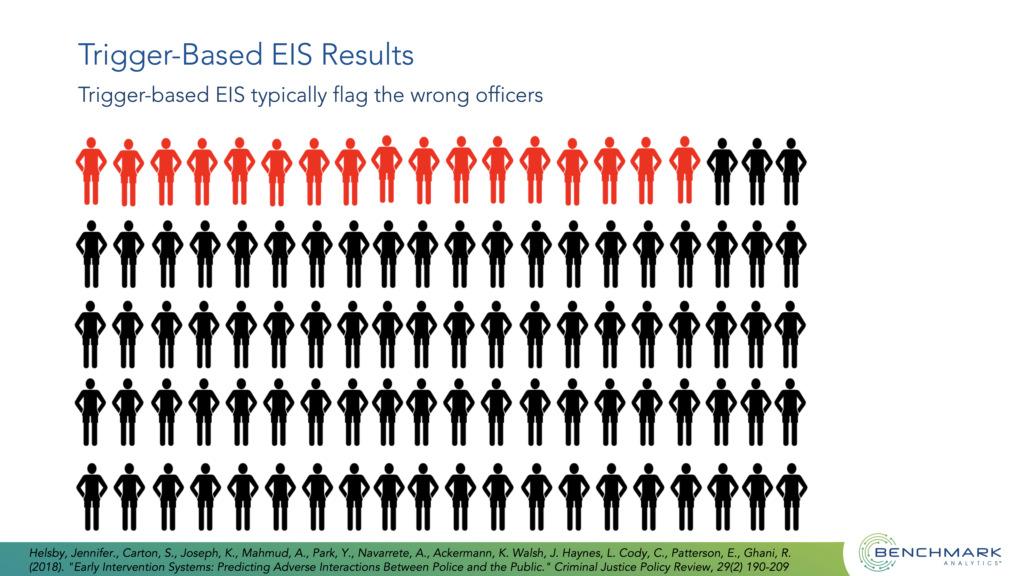 In fact, studies found trigger-based solutions produce false negatives 89% of the time, and false positives 71% of the time. If, as studies have found, 17% of your officers will have an adverse incident within a year, can you afford to make decisions using such an inaccurate view of your agency?

How do agencies improve at identifying these officers and successfully intervening?

When we first start working with a partner agency, we help them identify where they’re at on the path to digital transformation. As you can see, there are five stages, beginning with Undefined and ending with Predictive. Traditional EIS can get you as far as the Analytic stage, but the nature of the software means you can’t effectively, and proactively, support your officers using triggers and thresholds.

Watch Nick Montgomery, Chief Research Officer at Benchmark Analytics, share the studies behind Benchmark’s research-based Early Intervention System. You’ll learn how to identify your agency’s current transformational stage and what you gain by evolving to a predictive approach.